Writing Conferences and Me 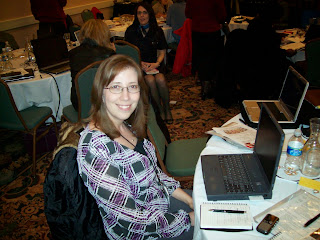 I'm about to get super real here, so bear with me. I love writers' gatherings--retreats, conferences, etc. This is a pic of me at my very first one. Bryan got to go with me and since he's much better in public than I am we had a great time. I love hanging out with people who think about the same things as I do, who have arguments with imaginary people and understand when I talk about the real struggles of bringing characters to life on the page. In fact, that smile on my face in this picture is because I had never before been in a room full of like-minded people. I've always been on the outside looking in, never feeling like I fit in anywhere. 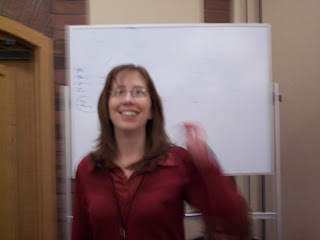 This picture is when it was my turn to share about my book. I had to present a brief synopsis to the group and then open up to questions. I'd stressed over it in the few minutes they gave us to prepare. Jotted down notes. And got up there and froze. This pic was after I tossed my notes and decided to "wing it." Obviously I'm enjoying myself.

Public speaking is something I can do. I don't generally freeze anymore. I have presented in front of kids, adults, large groups, small groups, etc. Like pretty much everyone else in the world, I love to talk about the things I love. Ask me about my books. Ask me about my kids. My family. Then try to get me to shut up. ;)

Right now, this very moment, hundreds (and I'm serious, there's like 700 ppl there) of authors are gathered in UT for the LDStorymakers Conference. These are my people. This is my tribe. When registration opens my Facebook groups and friends lists EXPLODE with excitement. Everyone is talking about how the registration works, what workshops and pitch sessions to sign up for, which classes to take, etc.

And I sit there quietly and don't say anything.

Because I'm not going.

I want to make it clear that this in no way reflects badly on the organizers or the conference itself. It's just me. The first time I went for only one day, because that's all we could afford and all the time I could take away from the kids. But I'm not a social animal. I hate crowds. I mean, really, really hate crowds. Just thinking about the 700 ppl at the conference and I get anxiety--and I'm 1200 miles away! That first time I was alone, didn't know anyone, was unpublished, had no connections, etc. I attended great classes, took fabulous notes, and then went home and went on with my life.

The second Storymakers Conference I attended, the next year, was after I got my contract for The Peasant Queen. I knew a few writers, I totally fangirled over some others, and I got to corner my contact at my publisher for information on my cover, because I hadn't seen it yet. It was exciting, it was fun--and I had a splitting, horrible headache.

I skipped dinner, met my brother at Ruby River, and went home early. I didn't go back the next day, even though I'd paid for it. I was sick. Miserable. And couldn't drive down to the conference let alone attend the whole day, much less get anything out of it.

Mind you, I've attended other writer conferences with these same writers and would-be writers. We have a ton of fun. I've shared a table with Brandon Mull, heard Brandon Sanderson speak in person, gotten books signed, embarrassed myself in front of Anita Stansfield (I inadvertently insulted her, and totally didn't realize until I'd walked away).

But I'm really, super hesitant to ever go back to Storymakers. (which is kind of ironic since this whole week I've been incredibly sick and even if I had planned to go, I would be a mess)

Right now that's not even in the budget. But my two experiences kinda left me feeling like I didn't belong, like there was some reason I wasn't supposed to be there and have the "amazing time" everyone else was having. Then, of course, we left UT for OK so going would involve a whole lot more expense than just the fees to get in--and that factors.

I don't know why I always get sick right before the conference, even when I'm not attending. It's not nerves; I'm excited to go. Or at least I used to be.

Since we've lived in OK the organizers of Storymakers have launched an offshoot conference, the Midwest Conference, that is held in the fall of every year--and it's in nearby Kansas. Not even that far away. I want to give it a try. It's not as huge a conference, so less people--which is easier for me to handle. It's nearbyish, meaning I can drive out there and come back in the same weekend and my kids are old enough to survive without me, even if Bryan is working all weekend.

So I'm kinda crossing all my fingers, toes, and maybe my eyes that I'll be able to go this year. There are some personal things coming up that may interfere, but I'll just have to cross that bridge when I come to it. I haven't attended any writer gatherings since November 2011. I'm feeling disconnected and I NEED my tribe. I also really want to become a better writer, and there's only so much that can be done about that on my own.
Posted by Cheri Chesley at 7:40 PM No comments:

Care to Help With a Problem I'm Having?

So here's the thing: my husband lost this job last week. And it kinda stinks. No really, it stinks. We were just at that point where we're starting to get our sea legs, and BAM!

I've been struggling a lot with what we should do. Obviously, Bryan's looking for a new job. He's applying and has his feelers out for leads all over. But I've finally been making good strides in my publishing goals--finishing The Lost Princess was a HUGE one. I'm all set to publish my TENTH title and now I have to figure out how to pay for the edits and covers I've contracted for my upcoming books.

I accept that it's likely I'll have to push back some of my projects, but the stuff I've already got people working on are things they need--and deserve--timely payment for. I can't expect them to wait until we've got our finances under control again. That could take months. It's not fair, and it's not right.

To that end, I've created this FUNDRAISING CAMPAIGN. I even wrote a poem for the occasion. You should check it out. :) We don't need much, just enough to cover the editing and cover designs that my talented crew is already working on. These are women with homes and families and expenses of their own, and I don't want to make them wait for payment.

If you can't donate, which is fine of course, please consider sharing the link. And thank you!
Posted by Cheri Chesley at 5:41 PM No comments: