My review of THE THORN by Daron D. Fraley 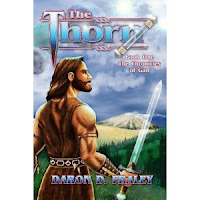 The full book title is The Thorn: Book One The Chronicles of Gan by Daron D. Fraley.

From the back cover: Three tribes are at war on the planet Gan, unaware that the sign of Christ’s birth on an unknown world—Earth—is about to appear in the heavens.
During a bloody skirmish with Gideonite troops, Jonathan of Daniel spares Pekah, a young enemy soldier, gaining his trust forever. These two distant brothers from estranged tribes covenant with each other to end the war being waged by a self-proclaimed emperor, and soon discovered the intentions of a far more dangerous foe—a sinister general bent on ruling those he can bring into subjection and destroying all others.

I'm not going to give away too much. But I will say while reading The Thorn, I drew visuals of Bible stories and Book of Mormon stories. After I put the book down I had to separate in my mind what was real scripture and what was Fraley's fiction.

Fraley has created realistic characters. Then he went and set them in a world full of vivid description and unique style. The man has a gift, and The Thorn is only the beginning.

Snatch your copy HERE. Before it's too late.
Posted by Cheri Chesley at 9:18 AM

Thank you for the review, Cheri!

Hi, Cheri,
Congratulations on the completion of the Challenge and what a super job you did of it! I am enjoying getting to know you, and I will be back regularly, at least once a week.
Ruby