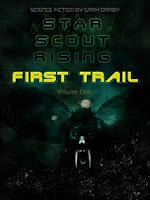 About the book: From the last frontier, Space. A must-have, out of this world adventure! Star Scout Rising, First Trail by Gary Darby is a thoughtful, awe-inspiring, and spine-tingling Sci-Fi mystery that follows a young man named Del Baldura during his quest for knowledge, truth, and discovery in the distant future of human and alien kind. This story has it all superb background, surprises, mystery, love, futuristic technological possibilities, bizarre life forms, and a hero trying to make sense of his duty and loyalty, his current leadership responsibilities, and his search for truth about part of his and his family's history.

I do enjoy sci-fi, probably more than I should. Generally, I don't read much sci-fi because they are very involved reads. Gary Darby's debut novel, Star Scout Rising, is no exception. The main character, Del, has his share of secrets--not the least of which is his name, linked for 17 years with reports of disgrace and death. He's a bit of a noble character, trying to rise above the ghosts from the past and find answers for the future. But sinister people are at work, vying for vengeance and power. Del's is definitely an uphill battle.

But that's what we like, isn't it? It's boring to read a book about the drudgery of every day. I can live that, thank you--I don't have to read it. It's entertaining to escape into a book like Star Scout Rising and see another person's possible view of the future.

Darby has a talent for description, and his characters came to my mind clearly. I could easily picture them as they interacted with one another. I like the intrigue of the first book. Obviously, the first of a trilogy can't answer every question if poses.

You can pick up a copy of the book HERE. Or HERE, if you're partial to your Kindle. :)

And check out the author's blog HERE.
Posted by Cheri Chesley at 8:31 AM

Cheri, thank you so much for your review of my first novel. I deeply appreciate your insight and constructive comments on my work. It is especially meaningful coming from a published author such as yourself. I wish you much success in your own literary efforts.