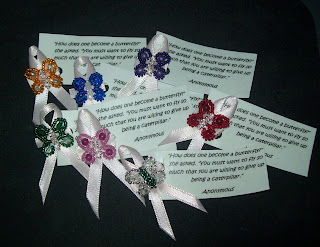 I got to see Rebecca on Sunday. She's sporting a really cute, black wig now. As she put it, her hubby really likes this one. HERE is where she talks about it on her blog, and you get to see a picture!

She also has been busy working on things other than the cute, butterfly pins. Check THIS out. Personally, I think it's a brilliant idea. I mean, how many brides end up barefoot by the end of the reception? :)

Rebecca also talks about her last round of chemo HERE. And HERE is where she gets up on her soapbox for a little bit and reminds us a little of how precious life really is.

And, if this blog post isn't "linktastic" enough, I've got a few more for you. If you've been haunting my blog, wanting to help out by buying my books, but just find a $4.99 ebook TOO much of a risk, now you can get The Wild Queen for just $2.99!!! Remember, SMASHWORDS offers the book in all formats, but you can also get it directly for your KINDLE or NOOK. I've heard really good things about it. :)

Happy reading!
Posted by Cheri Chesley at 10:35 AM 6 comments:

My friend Rebecca had her second chemo treatment last Thursday. Remember, if you will, to check out her BLOG and leave her comments. She does a pretty good job of chronicling her cancer journey with eloquence and humor.

When she's feeling up to it, she works on these little beauties: 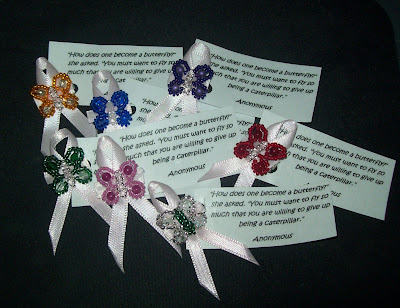 She's been kind enough to do several for me because, in helping her out as much as I can, I'm selling them for $2 each, or giving them to people who help in other ways. I have and wear my own little pink one that is unique and pretty. If you can't read the quote Rebecca puts on each one, it says:

"How does one become a butterfly?" she asked. "You must want to fly so much that you are willing to give up being a caterpillar." ~Anonymous

I've also provided all the handy links to my books so you can pick up whatever you want and, in the process, help Rebecca with her treatment costs. Remember, I'm donating all my book sales income to her *through August 31st, 2011* to help pay her medical expenses. If The Peasant Queen appeals most to you, then you can find the PRINT version here or from your area bookstores. If you'd rather entertain your mind with The Wild Queen, you can find the KINDLE, NOOK or OTHER e-reader versions here.

Or, if you'd rather a quick read, you can snag the chilling short story Ghost Bride for your KINDLE, NOOK, or OTHER e-reader.

And if you're not much of a reader, or don't enjoy YA fantasy novels, you can simply share the link for this post through Facebook or Twitter, or even on your own blog. There more people who know, the more help Rebecca will receive. You never know--just a couple clicks of your mouse may make all the difference! :)
Posted by Cheri Chesley at 1:34 PM No comments:

Authors are People, Too

This morning, Yahoo "News" posted an article about a children's author who was ejected from an airplane for swearing. Click HERE for the article. I clicked it mainly because I was curious whether a beloved children's author had been caught being human. Let's face it--we all make mistakes. Some are just more public than others.

What I found ridiculous is that this article is about a TV producer who happens to have a book coming out later this year and said the F-word (maybe) twice in exhausted frustration. This calls to mind many famous actors who have written a children's book here or there. We don't call them authors. They're still actors. But "children's author swears" has a better ring to it than "TV producer says F-word."

That's it, Yahoo. Go right for the sensationalism. Worry about accuracy later. Sigh.

So, before you start thinking that ALL children's authors routinely drop the F-bomb, I thought I'd tell you a story about one of the good ones. :)

Gail Carson Levine, best known for books like Ella Enchanted, The Fairy's Return, Fairest and Ever is such an author. When I checked out my friend Rebecca's BLOG a couple of weeks ago, it was with the intent to find some clue to lifting her spirits. Fighting cancer is no fun, but it generally has a heavy emphasis on the physical fight. I wanted to make sure she had the emotional well being to balance that out. I still want to. But, anyway, one her blog she lists her "Absolute Favorite Books" and, on that list, is "any Gail Carson Levine book."

This got my wheels turning. I'd met Gail briefly at The King's English Bookstore in SLC last year when she came out to help promote her newest Disney Fairy book. I even have a picture of her posing with my daughter on my phone. Let's put aside the fact that I was too star struck to admit to her that, yes, I am also an author and had a book coming out later that year. But I did listen while she talked, especially where she said she posts author advice on her blog. I've been following her blog ever since.

I thought to myself, wouldn't it be great if Rebecca got a signed Gail Carson Levine book in the mail out of the blue? Wouldn't that help lift her spirits? The answer: absolutely. So I commented on Ms Levine's blog and let her know what I wanted to do. I didn't expect a quick response--she's a busy lady--but I got one anyway. Yes, she'd love to send my friend a book. Which one? In order for this to be a surprise, I couldn't ask Rebecca. I chose The Two Princesses of Bamarre, because, to me, it's the story of finding strength you didn't know you had. And I believe Rebecca is stronger than she may think.

Sunday, when she came to church (the first time since her diagnosis), Rebecca told me, "You have connections." She'd gotten the book. Squeee! I was excited. Ms Levine really delivered. I'm so grateful, I just had to share how fantastic it is of her to take the time and trouble to do this sweet thing for a virtual stranger.

That's pretty cool. And I'm almost certain she did it without swearing. ;)
Posted by Cheri Chesley at 8:18 AM 6 comments:

Do a Beautiful Thing--Buy a Book, Help a Sister

My friend, Rebecca White, is 35 years old and has breast cancer. She got her diagnosis May 11th. She had a mastectomy May 13th. Three days later, she went back to the doctor to have the bandages removed. She confessed, almost in a whisper, that she just wasn't ready to see under the bandages.

Rebecca is an amazing, strong person. She's so skilled in all those craft-type things that leave me with glue on my fingers and glitter in my hair. She has a happy marriage and three great kids age 10 and under. Rebecca could be me. She could be your sister, your friend, your mother. She could be you. Check out her BLOG. She shares her journey and experiences there. It's heartbreaking and inspiring at the same time.

In general terms, we know cancer can strike anyone at any time. It's not an old person's disease anymore. It strikes children, mothers; in short, anyone. Soon Rebecca will start her chemotherapy. We're all optimistic for a positive outcome, but cancer surgeries and treatments do not come cheaply. Since she won't let me shave my head, I've decided to show my support for Rebecca in other ways.

This is more than taking her meals and taking her kids to and from church; I've done that. Anyone can do that, and they do. We have a supportive ward out here. But I wanted to take it a step further.

I'm donating all my book sales income through August 31st to help Rebecca and her family pay their medical expenses. This is something they need, and in order to make it the most effective I need all the help I can get. And this is why I'm appealing to everyone I can. My book sales don't just mean the royalties from selling print copies of The Peasant Queen (which, incidentally, is on LDS Living's Summer Reading LIST), but also all income from my two e-books--The Wild Queen and my short story, Ghost Bride.

It's so easy. All you have to do is purchase depending on your interests and ability to help. The Wild Queen and Ghost Bride can be found at SMASHWORDS, which not only offers the e-books for every e-reader including simply your home computer, but also offers the highest revenues.

Printed copies of The Peasant Queen can be found, or ordered, at your local bookstores. You can also find it online at AMAZON, BARNES AND NOBLE, and BORDERS.

Amazon and Barnes and Noble also offer each book for the Kindle or Nook, respectively.

Thank you in advance for your help, and happy reading!
Posted by Cheri Chesley at 2:02 PM 4 comments: