My review: Become by Ali Cross

Last weekend I attended a writers' retreat. If you've never done one, it's awesome. I doubt non writers would get as much out of it, but there's something about having over a dozen people in a house, and hearing only the clickety clack of their keyboards for hours at a time.

I also got my hands on some fantastic books. I've teased you before with news of the DARK CARMA tour, and now you're going to hear about the A. Ali Cross' book, Become. 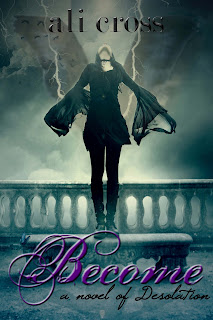 How can you not LOVE that cover?

From the back cover: Sixteen-year old Desolation Black wants nothing more than to stay in Hell where it’s cold and lonely and totally predictable. Instead, she’s sent back to Earth where she must face the evil she despises and the good she always feared.

When Desi is forced to embrace her inner demon, she assumes her choice has been made—that she has no hope of being anything other than what her father, Lucifer, has created her to be. What she doesn’t count on, is finding a reason to change—something she’s never had before—a friend.

My take: Ali is a genius. Seriously. I was at a WRITERS' retreat, people, not a READERS' retreat. But I wanted to see what she wrote when she signed it. Then I thought, oh, I'll just read the prologue. Then my eyes flicked--flicked--to the first chapter and caught a few words.

I was 183 pages in before I forced myself to stop.

I love Desi--her struggles, her weaknesses, her strengths. It can't be easy to make Satan's daughter a likable character, but Ali does it with such finesse you kind of don't realize it's happening until you find yourself rooting for her. I love the Norse mythology tie-ins, but I love mythologies. This story is all about the murky gray, but none of the characters leave you guessing whose side they're on.

Ali's writing style fit me. Become Does not have the rough feel of an author's first book. I actually found myself imagining editors kicking themselves for letting this one slip through their fingers (as I read). It's that good, that compelling.

I honestly can't wait to see what she does next. And, if enough people know about Become, it could easily become a best seller.

**Disclaimer, if you want one. I bought this book with my hard-saved money, so you can bet I'd let you know if I'd been disappointed!**
Posted by Cheri Chesley at 12:56 PM

Great review! The more I hear about this book, the more I want to read it. Thanks!

I'm glad you loved it! I agree. I cannot wait to see what Ali does next!

GREAT review. I agree with you. The book was fantastic. Way to go, Ali. And I loved meeting you at retreat, Cheri.

I'm so glad you liked it Cheri. Thank you for your kind and generous review! ((hugs))