The Poodle Skirt: What it should teach me about writing, Pt 2 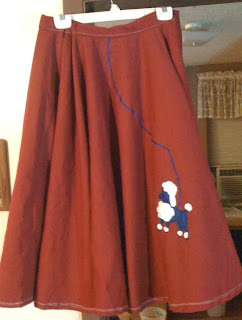 You all should remember this poodle skirt from yesterday's post. Here it is if you want to read it again: Poodle Skirt

All caught up now? Great.

Most of you can already see where this is going, but I have to get it out anyway. I've shared with you the utter dread and torture and agony that was the making of said skirt, and I told you why I did it. Not for the joy of it. Not for accolations.

But because I love my daughter.

When you love someone it sometimes means you sacrifice. Not your soul, not your self-worth, not your ideals or your morals, but you do sacrifice. The time and energy I sacrificed weren't for this stupid skirt--it was for my daughter. My 12-yr-old, smarter-than-me, slightly snarky, occasionally disobedient, stubborn, talented daughter.

Friday, in my post-skirt recovery, I realized that if I was willing to sacrifice so much to do a project I hated, why was I so hesitant in my writing--which is something I love? I used to think I was good with deadlines, that they made me work harder so I could meet them. But somewhere along the way, after seeing self-imposed deadline after deadline slide by, I realized that's not the case. So it wasn't that I had basically only one day to make the skirt.

Is it because I like to sew? Not particularly, and I'm not particularly skilled at it. But I do love to create things, and sewing just enables an aspect of that. But I got no pleasure from creating this skirt, so that's not it either.

Basically it came down to my girl. I did it for her. Only for her. Not for me. Not for the satisfaction of doing it but because I didn't want to see her disappointed if it was something I could actually do for her.

So if it's the person who matters most to me, what about the people who are waiting for my next book?

And what about my writing career in general? My publishing goals? My plans for the future? Surprisingly, little of that really has to do with me. I don't want fame and fortune (though a little fortune would be nice, let's be honest) or to be on numerous bestseller lists. I've told you before I like being invisible. (you may now ask if I like it so much why use my real name to publish--and that plays into the part that's really about me, the part where I have to stand for what I say and my goals to improve with each project)

And then there's the fact that I write for my kids. There's so much I want them to learn and so much I want them to know, but one of the biggest things is that each of us needs to be able to follow our dreams. If what you're doing isn't what you love, then why are you doing it? I want them to pursue their dreams, to make success out of them. And how can I properly teach that if I don't live the example of it? Because the failure comparison of do it because I didn't just doesn't cut it.

Lastly, there's the most spiritual and personal reason why I write and publish. Because I know with absolute certainty that it's my calling in life. It's my part in God's plan. I have two callings--mother and writer--in that order. And I love God, so the progression goes that I should be willing to sacrifice to fulfill my part in His plan.

But, yeah, that's a lot of self-imposed guilt there and I'm only human. I'm going to backslide sometimes, make mistakes, and have to own them. Like right now. I don't care if the world never knows my name. But someday I'm going to have to answer for the things I did and did not do, and I feel there should definitely be more effort on my part in that regard.

I want to be able to say that I tried my best. Right now, this is not my best. Not my very best.

I know I get hung up on my first drafts, wanting them to be perfect and needing as little revision as possible. My new goal is to just finish the dang things. Become a fantastic RE-writer. Stop letting my doubts dictate my actions. Write for 5 hrs a day. The kids are in school, what's stopping me but me? So what if I chuck 95% of it later. That's 5% more than I'm doing now. It's still progress.

It's high time I start applying what I know, push through my personal issues, and just write. Because of the love.
Posted by Cheri Chesley at 10:00 AM

These are very motivating ideas, especially for someone who writes, like me.