I Know What I Am

After more than a month of struggling with my concussion recovery, I've finally figured out what I am.

I'm a one year old with burned hands.

Just over 6 years ago, while I still had my day care in UT, I received a phone call from one of my day care moms. "What do you do about burns?" she asked.

The conversation evolved. Her sweet little girl, who I tended from her first weeks of life, had put both hands on the hot barbecue grill while Dad was cooking outside. Both of her hands suffered second and in some places third degree burns. They took her to the local hospital where her hands were treated and then tightly bound.

The next time I saw her with her mummified hands, it was all I could do to keep from crying. I love that little girl so much. She stole a piece of my heart and has carried it around with her all this time. But back then, we had practical issues to figure out.

Mind you, there are certain things you just can't explain to a one year old. Like how she should relax and let people do things for her while she healed.

I wasn't long before her parents took her to the children's hospital where they were given proper care instructions for letting her hands heal. That involved changing the dressing at least three times a day. When I had her, I did it twice a day and her parents did the rest. We were in this together--doing everything we could to help her heal. (I want to add here that she did heal with almost zero scarring and full use of both hands)

It took weeks. She adapted to her new reality and dealt with it as best she could--but she was still a baby and did too much.

And now we're back to me and my "post concussion syndrome." I've struggled with my new reality, tried to keep doing regular things, and tried to adapt to my new limitations.

In doing so I've learned that one year old baby was not the only fiercely independent girl in the equation. My injuries aren't visible, and you can't see them, and I know that makes it harder for people to be patient about them.

Still, for all intents and purposes, I am a one year old child with burned hands.
Posted by Cheri Chesley at 12:36 PM No comments: Links to this post 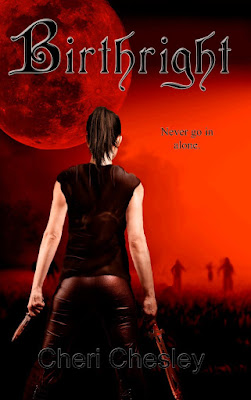 HAPPY LABOR DAY! I'm having a sale. TODAY ONLY you can get BIRTHRIGHT for only 99 cents! So pick your favorite ebook provider and get clicking.

NOOK
Nook is being slow to update, but if you absolutely need the Nook book copy, just keep checking for the price to drop.

BIRTHRIGHT is my YA dystopian novel set several hundred years after our civilization collapses. Since humanity is resilient, we evolve past our dependence on technology and return to a feudal system in order to keep track of everyone and keep people safe from the predators that roam the lands. And I'm not just talking about  the fanged bunnies, either. I'm talking about the Devourers, descendents of former humans mutated by chemical warfare.

Verity is the king's oldest daughter, but what he needs is a son to inherit (some things we just don't evolve past). So he trades her for the chance to have a son, and Verity would rather take her changes with creatures that hunt humans than submit to her father's will.

Happy Labor Day, and happy reading!
Posted by Cheri Chesley at 8:10 AM No comments: Links to this post