With a title like that, I suppose you know what's coming. :)

I got some good news from the doctor. While my brain injury is still going strong (particularly after falling in the shower Feb 17), my leg is clot free AND my blood thinness is at therapeutic level. So double yay! I'm not waiting for everything to be perfect. Nobody can ask for that.

For 2017, I've set a personal goal: write 12 stories. It helps me immensely to organize, so I wrote my projected stories down in a list and put it up in my bedroom where I can see it every day. A couple are full length novels, but most are short stories and novellas. I can't say if or when any will be published, because there are outside factors at play, but this year I WRITE! 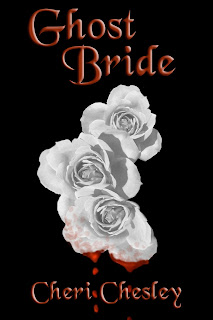 Also, it is time to say goodbye to this beautiful piece of cover art. A while back, I posted my intention of retiring Ghost Bride as a stand alone short story. I've finally gotten around to adding the micro fiction to the back of my ghost novella, A Haunting Love. Rereading Ghost Bride reminded me of all the things I love about the story, and while I realize the chief complaint about the story is that it's too short (which to an author is music), I think putting it at the back of another story will be a good fit. Plus, now, it is finally available in print! Before, because of it's length, that wasn't possible.

I've also begun the process of removing myself from Smashwords. I've found it hasn't done me much good over the past 3 years, and I'm clearing out the less useful parts of my writer life. Draft2Digital serves me much better, and between that and Amazon I've covered a much larger audience.

The other thing I've spent time doing was a little more risky, and I did it without consulting a single other published author--which was unlike me. Amazon publishing, at the beginning of this year, opened up the option for print books to be created alongside your Kindle e-books. It is a fledgling venture, still with many bugs to work out, but they offered a simple conversion from Createspace for those of us who have created books there to bring them over from Createspace to Amazon publishing and link them up to their Kindle companions.

I have now done this successfully with every single one of my self published titles. It wasn't easy. At least three of the covers required tweaking, despite the fact they were approved on Createspace. (like I said, the Amazon publishing's print process is still very new) One cover, Birthright, was rejected, I resubmitted without making any changes, and it was accepted. So I tried that with the other two (a few times, actually) but that didn't work.

My reasonings for the change are as follows: Createspace is an Amazon creation, and if they are doing print books differently, I feel it's with an intention to eventually do away with that option on Createspace. I also like having the Kindle and print books in the same place, rather than in different places. Not to mention how royalties were calculated. You'd get a higher royalty with a Createspace book if someone bought it from Createspace's site, but nearly everyone bought it from Amazon, where the royalty was lower. All in all, this just seems like a more streamlined process, though I am looking forward to when they get some of their bugs worked out. For instance, the author can't order proof copies yet. It's something they plan to offer in the future. So I just paid retail for a copy of each of my books to make sure they look as good in person as they do in the digital proof (and as good as they did through Createspace), and got a royalty off of each book I purchased. It's weird and silly.

But, all things considered, I'm starting to feel like an author again.
Posted by Cheri Chesley at 3:32 PM