Bear with me; this is going to be somewhat of a soul-baring post. Krystal has come a long way, as have I. When I initially wrote the story, Krystal was me. So, I envisioned myself when I thought of her--only prettier.

Years later, I got that in my girls. Last year my youngest even wanted to be Krystal for Halloween--how special is that? 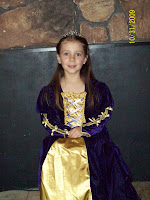 But if they decide to make a movie about my book, they wouldn't use either of my girls. So I had a few other suggestions. Like Sara Bolger from The Spiderwick Chronicles.

Or Abigail Breslin. When she's a little older.

Krystal is more than the sum of her beauty, though. She's spirited, sassy, resourceful and pretty good with a sword. She grew up on a farm with her family. When Krystal was 7, her father died and left her oldest brother--Andrew--as the head of the family. He was 15. Their mother let her grief consume her. She lost her husband and her eyesight inside of a year. This left Krystal to become the woman of the house--and with four older brothers that's a lot of responsibility.

When she ends up in Fayterra as a captive of King Gregory, Krystal uses her skills to do what anyone would do--get away. No matter how hard he tries to make her his queen.

Posted by Cheri Chesley at 7:18 AM

Your daughter is beautiful as Krystal!

Such a pretty daughter, how proud you must be.

I think your daughter could absolutely be Krystal. She's so pretty and I'm sure she has the other qualities too. I love how she wanted to be Krystal for Halloween. That is so sweet!

That is so sweet that she wanted to share that character with you and be her for Halloween.

Krystal sounds fascinating! So cute that your daughter wanted to be her.

Very cute little girl. Sure it was a great honor to have her want to dress as Krystal.

Your daughter is a cutie! What a fun post!

Your daughter is gorgeous. I'm sure she could be Krystal if she really wanted :) Mind you, I'd still encourage her to be herself, cause I'm sure she's even better! :)

Wow I love Krystal. She reminds me of one of the mc's in my book that is visiting agents right now and your daughter is gorgeous.