As the weeks tick by waiting for my publisher to get back to me about The Tyrant King, I find myself dwelling more and more in the world of doubt. I know this is a normal process authors go through, but I doubt it gets easier with time and experience.

Which makes me wonder how much authors are willing to put themselves through, and why?

Have I really learned to be THAT concise of a storyteller?

Or is it that I've become TOO concise? Am I not telling enough of the story?

Forgive me if, for a while, I try to hold my footing while the waves of doubt smash me against the rocks over and over again. Eventually I'll make my way back to solid ground--one way or the other.
Posted by Cheri Chesley at 9:23 AM 8 comments: 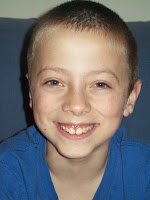 It’s my pillow, but I don’t mind.
His drool will dry in no time.
He is my son, my little boy.
The one I thought might die.
He is so peaceful, in my bed;
his blanket tucked around his head.
His knees are up; his left toes curled.
He means more to me than all the Jeffreys in the world.
Though it is dark, in my mind’s eye
I see that scar that saved his life.
I know how lucky we have been.
No therapy or hospital stays for him.
I count the years that I have had
with Jeffrey by his twin brother’s side.
A Daniel without Jeffrey would not be whole.
I know this deep within my soul.
I love my boy, my miracle.
I thank God he is with me still.
I pick him up, his blanket, too.
He rests his head on me and sighs.
I carry him off to bed.
He is mine. 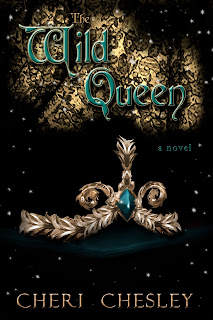 My goal this week is to finish the edits for The Wild Queen so I can get it out to my beta readers and have it ready to go by the end of this month. My reason? Next week the kids are on Spring Break--and three of my kids have a birthday next week. Ya, I'm not going to get anything done unless it's this week. :)

Saturday at Write Here in Ephraim, author Michael Knudsen taught a class on self editing that was incredibly timely--at least for me. I feel a teeny bit robbed, since we ran out of time and he had to cut a large part of the presentation short. His technique was endorsed by the incomparable Tristi Pinkston, who not only is a published author of 6 novels but also a freelance editor. Tristi appreciated Michael's editing process, and appreciated how dynamic his finished story turned out to be because of it. Wouldn't we all want to have a finished book like that? I know I do.

I'm really excited to announce the coming of The Wild Queen, a not-quite-novel-length prequel to my published novel, The Peasant Queen. My excellent cover designer, Deirdra Coppel, has come through once again. Don't you agree?

Here's a little about the story:
Roweena is the crown princess of Norvallen, a tiny kingdom with only one thing of value—the Healer’s Grove. The trees in this small section of forest are enchanted, giving a sap that can be mixed into potions or salves to heal almost any wound.

And it’s in high demand.

Lucien, the young king of neighboring Demarde, comes to Roweena’s father seeking an alliance, but comes away with a marriage contract for young Roweena’s hand. Furious and stubborn, this untamed beauty vows he will never conquer her. But the contract purposely gives her time to come to terms with her fate.

It gives her too long. Before Lucien can return, Roweena’s home is attacked and her parents are murdered. The Healer’s Grove is also attacked—burned to the ground. With nothing more than her horse and the clothes on her back, Roweena goes to the only person she knows can help her. Lucien. But he can do nothing with no legal claim to Norvallen, so they marry.

Lucien and his army destroy the invaders and rescue what remains of Roweena’s people. He then makes Norvallen a part of his kingdom, but separate, ruled by a man Lucien trusts who answers only to him.

Roweena tries to carve a piece of life out for herself in Demarde, but her wild ways often clash with Lucien’s calm, reasoning manner. They have a son, Gregory, and then a daughter, Falina. When Roweena is pregnant for the third time, she vanishes. Speculation runs rampant. Was she kidnapped, fallen victim to a mysterious enemy? Or did she run away?

Watch this blog closely during April for announcements of when The Wild Queen will be available!
Posted by Cheri Chesley at 9:25 AM 3 comments:

Bees in My Butt Blog Fest

This is me totally dropping the ball.

My friend, Rebecca Shelley, trusted me to put up this blog fest info and link last week. Or even the week before. I started well, but then the email got lost in the swamp that is my email inbox.

If you're quick, you can still enter the contest. Drawing will be held Monday.

HERE is the purchase link to buy Bees in My Butt for $3. Coupon code: 3UKPPPQM

I want you to know I've read the books, and I find them honest (in the way they depict smart kids) and very funny. This is entertaining stuff, and Rebecca is not short on talent. Even though you've missed the fun, please don't hesitate to check out these books. They're worth it. :)

You can read about the Blog Fest HERE.

And here's a little about the books: Take Monkey, a literary genius with flatulence; Bean, a science and math guru; Vinny, a computer whiz who can't keep her mouth shut;
and Art, an artist who can shoot a basketball like a pro, confront them with a mess of fourth grade trouble, and watch the fun
explode.

In Bees in My Butt, the first book of the Smartboys Club series, the members of the Smartboys Club use their skills to battle a group of crazed Ninjas that take over the school. And it happens on a day when Monkey has the worst case of flatulence imaginable.
Posted by Cheri Chesley at 11:53 AM 3 comments: