In Case You Missed it: Big Cover Reveal!

I'm putting up the cover for The Tyrant King (May 2012) for anyone who has not seen it yet. Because I love it. And it's just so cool. 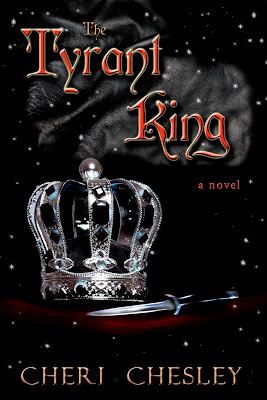 From the back cover:
Her heart paused, but Krystal remained defiant. “You lie. You would never do such a thing to my child.”
“You think not?” He laughed again and she recoiled. “I’ve sworn an oath to decimate my dear cousin’s present and future, take over his kingdom and his crown, and fulfill my father’s dreams. And you think I would hesitate to murder his offspring? Come now, Krystal. I know you are smarter than that.”

The kingdom of Fayterra is abuzz with preparations for Princess Alana’s wedding, but the arrival of a stranger threatens the peace of mind of the entire royal family. Soon, their people are under attack. War is declared. And not everyone will survive.
As the future becomes bleaker and the mystery continues to unravel, Krystal’s enemies will learn just how far she will go to defend the people she loves.
Excited yet? :)
Posted by Cheri Chesley at 11:52 AM

Your book sounds great, and I love the cover.

That cover is fantastic, Cheri! Just read the Peasant Queen again (as well as the Wild Queen). Super excited! :)