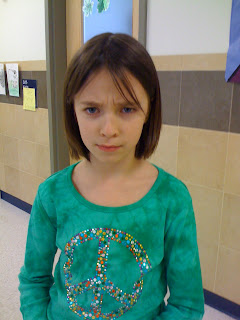 I allowed myself to dream of being a writer. This is different than simply *wanting* to be a writer. Ever since I could perform the tasks, anything that involved words, reading, and writing were the things at which I excelled. I still have an old second grade "journal" where I wrote simple sentences and received inordinate praise for them from my teacher. 2nd grade. You know, when you're 7 yrs old?

I even loved word problems in math. I mean, come on.

But, even then, I was practical. Realistic. While I dreamed of fantastic settings and characters and creatures, I kept one foot firmly planted on the ground. Why? Primarily because, even at my youngest years, I knew what it meant to not have enough money for all the bills. I knew it in my core, and it was dark and scary.

So I told everyone I wanted to be a teacher, said it so many times even I began to believe it. But it wasn't what I truly wanted. And it wasn't until high school that I really, truly began to consider chasing my true and actual dreams. I didn't want to go to a job every day. I wanted to live in my fantasies. I wanted to write. I wanted to create stories and share them with the world.

But, as I've mentioned before, I wanted to do this without anyone knowing it. The idea of sitting at home furiously writing an epic novel and publishing it to great acclaim without anyone disturbing my regular life was perfect.

Stop laughing. It seemed possible then. ;)

My life sort of imploded on me before I graduated high school, and then I recovered and met the man I would marry, and we had kids in rather rapid succession. I got pretty busy, and didn't really seriously evaluate my dreams of writing and publishing until 2006.

By then, of course, the publishing world had changed dramatically. As it continues to change and evolve. As it must. I realized I couldn't live the anonymous writer life. As much as it would pain me I was actually going to have to stretch myself, grow, reach beyond myself, become more than I used to be.

It has not been easy. Even after three published novels, all I can do as I sit here and work on another is think, "Is this going to be the one? Is this going to establish me?"

It's not that I want to be JK Rowling or anything, because really--I don't. But I have a nagging suspicion that someday I will be much better known than I am now. That feeling hasn't left me, and every time I polish up a new gem to share with the world I worry. I fret. It can sometimes be paralyzing.

Because, despite my best efforts, I can't let go of that fear of success. Which is stupid, I know. Many authors do very well and even have a couple of moments in the spotlight but can still do their own grocery shopping without being mobbed. You can be on bestseller lists and still be essentially invisible in your everyday life.

So why does it worry me so much? I wish I knew. Truly. I'd probably write a lot faster if I could get past it, and that would be better for everyone.
Posted by Cheri Chesley at 2:53 PM

The Damsel In Dis Dress said...