When I say I'm a writer, you should probably know that the majority of my "writing" time has nothing to do with the pen, paper, or a computer keyboard. So much of that time is consumed with thoughts, plans, story process, research, and aggravation (mostly self-imposed) that sometimes it's hard to say, "Yes. I'm a writer."

See, I have this story. And it's a great one. And I wanted to release it for Halloween (haven't given up yet) but the story itself isn't cooperating. So I thought I'd share a little of the process in making Love's Price ready for reading. 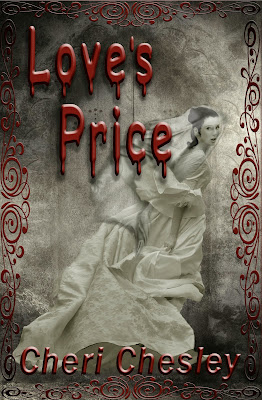 First off, you need to know it's not because I don't have the perfect pretty packaging. As you can tell the incomparable Deirdra has done it again. I call her incomparable because she absolutely defines that word.

No, the story is eluding me because of this: I wrote it years ago as a gift. So I have this really pedestrian first draft that needs so much revising. And I've made some vital changes to the story in the mean time, which means considerable overhaul.

I got about 2 pages into it when I stalled. And over the weekend, thinking about the story and considering setting it aside for The Lost Princess (I have that cover, too, but you're going to have to wait) I realized this particular story is going to stretch me in ways I hadn't anticipated.

Love's Price is an onion. Not because it's smelly, but because it has layers. LAYERS. The best way to write this story, my brain has determined, is to first write a quick rough draft. First layer. Then go through and add all the setting and personality quirks of the characters. Probably 2 layers there. Then I have to go through and enhance the creepiness factor. I want this story to be scary, and I'm not an inherently creepy person. So there's another layer. Then I have to make sure the ghost aspect of the story (because, when you think about it, this story is really *2* stories--Alita's and the ghost's) makes sense. Another layer. And then I have to go through it one more time to be certain it all flows right and I don't have any serious mistakes. Another layer.

And that's all before my editor even sees it.

But then there's that pesky real life that intrudes all the time. Since Bryan has been in Minnesota I have promised the kids that I will *not* write while they are home. Still that gives me all their school hours to work on the book. Well last week I had 3 sick kids who did not go to school except for one day. Then Bryan came home for 36 hours. I'm sorry, but I haven't seen my husband for 6 weeks. He's home for 36 hrs and I'm going to make the most of every second. Family first. You know that about me.

So Tuesday. Tuesday is when I dive back in to Love's Price and crank out that first layer. And maybe, *maybe* if I really push myself I can have it to my editor by Oct 1. That would be an accomplishment. That would make me feel like a writer again. :)
Posted by Cheri Chesley at 10:11 AM