ROWEENA! Or, in this case, my daughter dressed up as Roweena last Halloween. 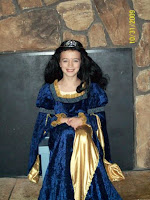 Roweena is the featured character in my second novel, The Wild Queen. She is extremely noble and headstrong and, because of that, often misunderstood. 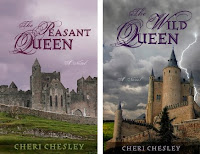 Just as an aside, these are not the final covers for the books. But note how awesomely they complement one another?

As a child, Roweena tries to be a good daughter to her parents, the king and queen of Norvallen. Her childhood is laced with tragedy, as often happens, and she doesn't always get what she feels she needs from those around her. She struggles to control an almost overwhelming desire to act out--and often fails.

At fourteen, she is entered into a marriage contract with Lucien of Demarde. They are to marry after she turns 17.

But real tragedy strikes; the kind that redesigns Roweena's past, present and future. Desperate, she turns to Lucien for help. As King of Demarde, he has connections.

Roweena becomes a mother--I believe I've stated this before in my blogs. She's Gregory's mother, the very same Gregory who is controlling, despotic and tyrannical in The Peasant Queen. Then she has Falina, who grows up to become Jareth's mother. (see my J post if you don't recall him)

After that, Roweena's life takes another unexpected turn. It's this event that ends up shaping her son, and her daughter, into the people they become.
Posted by Cheri Chesley at 7:04 AM

Those would be very cool covers for the books. They would catch my eye.
Lee
A to Z Challenge Reflections Mega Post

Woooo. Hoooo! Sorry, just had to do that. I love the pics of the girls dressed up as your characters. :D

Nice covers! So where did you go to create a mock cover? I want to do the same with mine.

Actually I used a designer. I found the pics I liked at istockphoto.com and then paid for them to be made into covers